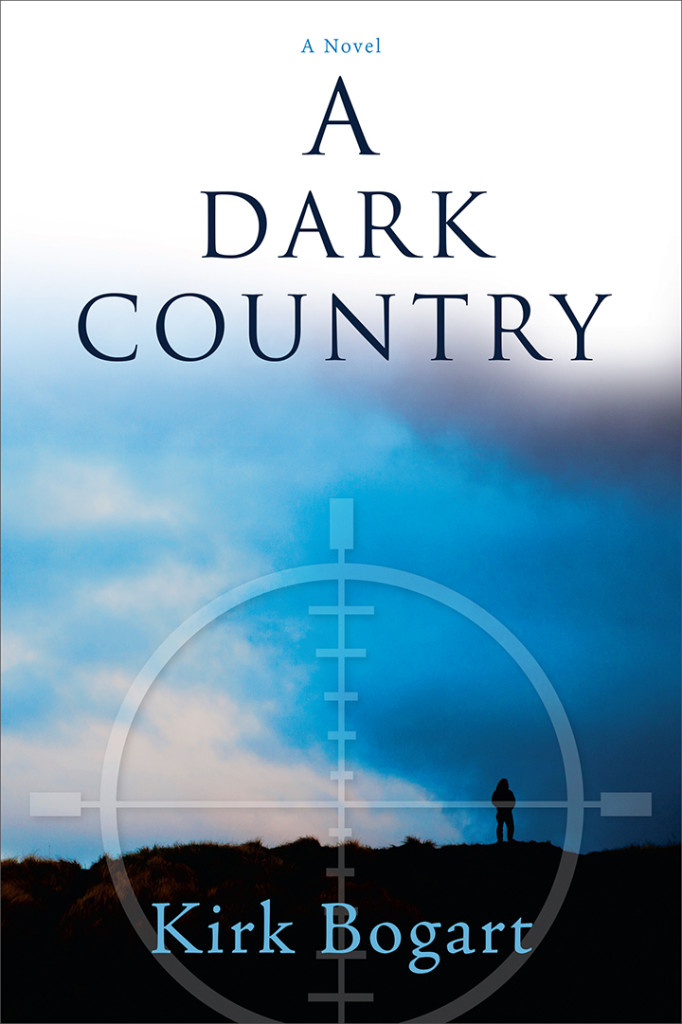 “In A Dark Country Kirk Bogart weaves an intriguing tale that explores the dark side of one man’s mind and the efforts of another to extricate himself from a life of good intentions gone bad. Thought provoking, it’s a story that will keep you drawn in from beginning to end.”

A red-tailed hawk circled upward in the warm morning thermals far above the two men lying on the rocky ledge. The hawk hadn’t noticed the two men, even with his vantage from the air, and from the ground—from any direction—they were invisible.

They lay flat on their bellies with their chests propped up against camouflage packs behind large scoped rifles that rested partially on the packs and partially on bipods attached at the muzzles. The bipods held the rifles steady, the feet seated firmly on the rocky earth. Brush covered their position, and the morning sun rose over the ridge at their backs. The sun’s positioning was intentional; it illuminated the target below, and no reflection off the glass of their optics would betray their position.

The two men tensed suddenly at the faintly audible brushing of hardened cartilage on rock on the trail below them. The sound was only noise to the men; it wasn’t identifiable, nor was anything visible. But their nerves held them fixed on the trail, waiting to see what or who was on their path. Then, they heard the sound of a bush bending under the weight of a body and whipping back as the body passed. The men turned their rifles toward the faint sound, and each man heard a metallic click disrupt the silence of the hot Mexican morning air as the other released the safety on his rifle. They were ready for action as soon as the source of the noise below them presented itself. The men waited anxiously, and one of them, the one responsible for their safety, wondered, How could anyone possibly know we’re here?

They had been stationed on the rocky ledge ten yards above the trail they’d hiked in on since the evening before. One of the men watched over the other, and sometime during the darkness of the previous night, he was sure he’d heard the rattles of a diamondback faintly clicking as the snake slithered over the hard, uneven ground. It wasn’t the buzzing rattle most people associate with a rattlesnake, but a more common sound none but a few men would recognize. This man, however, knew the noise, and he also knew that his companion, his client, would not. So the guide said nothing and the client rested easily through the dark hours, blissfully ignorant of the viper in the brush with them. But now, as they lay in the dirt with the scorpions and snakes, waiting for their opportunity, the kiss of the morning sun warmed their backs and lifted the curtain of night’s darkness. At least they could see danger if it were upon them.

The men’s breathing quickened under the tension, and the guide took a deep breath and let it out slowly. His breathing eased to a normal rate, and he closed his eyes for only a moment and listened. He strained to pick out a sound from the brushy trail below that would give up their stalker’s position, but nothing came except a long silence. Anxiety built in the guide’s chest as the silence grew longer. He nestled into the butt of the rifle he was lying with in a prone position and wished he had a shotgun or some other open-sighted, close-range weapon. But he didn’t. He looked through the scope and over it at the same time, and there was still only silence. His finger pulled up tighter on the trigger, ready for whatever was about to step from the brush into the opening in the trail. Then he blinked.

In the instant it took for the shutters of his eyes to close and reopen, a scraggly coyote stepped from the brush and stood in the trail. He was ratty, skinny, and unlike the plush winter coyotes in the North Country. The men exhaled with relief and chuckled silently, instinctively holding it in so they wouldn’t spook the animal. The dog looked directly at the two men hidden by their camouflage, which matched the brush they were tucked into. The guide felt the thermals hitting him in the face and knew the coyote couldn’t smell them. The dog lifted his nose in the air for answers to his hunch that something lay hidden in the brush above him. He licked at the air with his tongue and then licked his nose, searching for some shred of scent that would answer his wild curiosity.

The guide looked askance at the animal while his client looked him directly in the eye. The coyote’s eyes recognized what his nose could not: a man staring at him. He continued on his way, dragging an injured hind leg that scraped strangely over the rocky ground. A synapse closed in the guide’s brain, connecting the sound of cartilage on rock and the claws on the coyote’s bad leg. The dog disappeared into the brush where the trail was swallowed by dense growth as quickly as he had appeared.

“There he is,” the guide said.

Both men turned and looked at the house, and then at the photos of their target, which lay on the ground between them. Then they took turns looking through a spotting scope and the scopes of their rifles at the Mexican man in the office of his house nine hundred yards away.

“That’s definitely him,” said the client.

The guide reached over and clicked the dials on the tactical scope of his client’s rifle, adjusting it for yardage and decline.

“Wait for him to step in front of an open window. Then take him.”

The Mexican man sat down at his desk with his phone to his ear. His conversation was serious but not heated. Most of his conversations were serious. He wore Barker Black ostrich-toed dress shoes, a starched Lorenzini dress shirt, a Rolex watch, a couple of gold rings, and a fine gold chain around his neck. A woman fifteen years or so younger than he was came into his office, kissed him on the cheek, and placed a cup of coffee on the large desk in front of him. He nodded at her with contrived affection and motioned for her to close the door behind her as she left the room. When she did, he got up and walked over to the built-in cabinets on the wall of his office. He picked up the television remote and turned on the set mounted to the wall in front of his desk. The office looked like the home office of any wealthy businessman.

The well-dressed Mexican man walked back to his desk, flipped through a couple of channels, and then laid the remote down on the desk. He walked to the cabinet, and, turning his back to the two men nine hundred yards away who were watching him through riflescopes, he took something off the shelf and looked at it for a moment. It was a framed photo of his four children in front of a Christmas tree. Two were in their twenties, and the other two were younger—elementary school age, and from his second, much younger wife.

In an instant, everything shattered. His spine, his sternum, and the glass frame in his hand. Something had hit him in the back with the weight of a sledgehammer, and the force was so tremendous that it blew him face-first into the cabinets. He bounced off and fell backward. A blinding bright light filled his head for a fleeting moment, and then he felt nothing under him—no legs, no control. He fell on his back with an empty, dull thud. For a fraction of a second, he saw the ceiling of his office, but just as quickly it faded to black. Then all movement and all thought ceased forever. All that was left was black.

To read the rest of the story, buy your copy today in print or ebook!